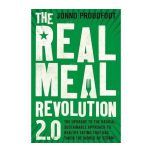 Since the launch of the original Real Meal Revolution in November 2013, low-carb high-fat (LCHF) eating – otherwise known as Banting – has taken South Africa by storm. The book has sold 275,000 copies and counting, and both it and its follow-up title, Raising Superheroes, have been published internationally by the Little, Brown Book Group. The Real Meal Revolution website has seen more than two million visitors since its launch in 2014 and the company supports thousands of Banters on a monthly basis.

Inevitably, a topic that has such far-reaching health implications and generates so much interest has brought with it controversy, confusion and copycats. Three years after the revolution hit South Africa, it’s time for an overview of what we’ve learnt from the original Banting revolutionaries. Having collated reams of data and overwhelming quantities of personal feedback from those who’ve embraced Banting and had their lives changed for the better as a result, the Real Meal Revolution returns to bookstores with a comprehensive, authoritative handbook on the Banting lifestyle, incorporating the latest science on LCHF eating, gut health, gluten sensitivity, fasting and more.

The result is the evolution of the revolution: a streamlined, accessible, easy-to-read review of what Banting means and how to approach LCHF eating in the most effective way possible..

“I think it depends on each individual as to how long it takes to accept the information as fact, their resolve would probably be stronger. I’m impressed with the Restoration phase. It is what was missing in my personal journey. I am now eating organic, GMO free and free range, my immune system is responding so quickly. I have had a rash for almost 5 years. It’s nearly cleared up, and that after just two weeks.”